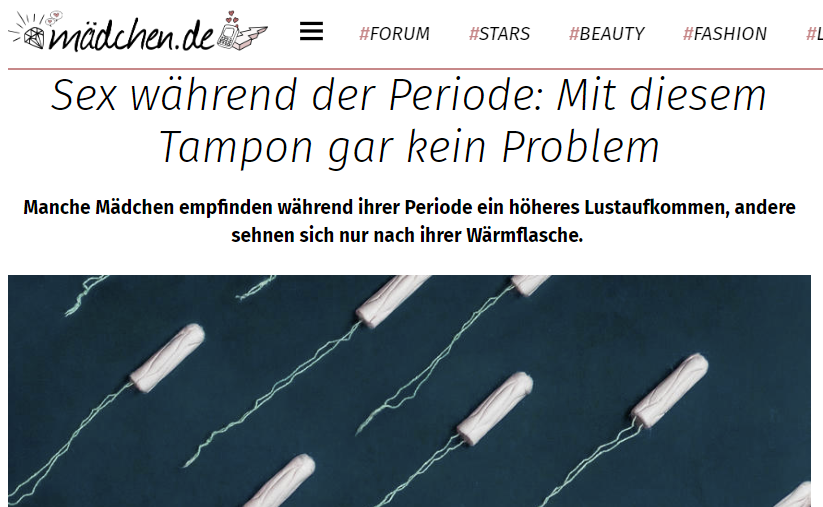 No problem at all with this tampon
Some girls feel a higher level of lust during their period, others just crave their hot water bottle.

Even if you don't lack desire, does the thought of hygiene and bloody sheets keep you from having sex during your period? In any case, it is important that you as a couple talk openly about it.

Sex during your period? Sure!

Can the tampon stay in the vagina during sex?
You should remove the tampon before having sex. This will interrupt foreplay for a short time, but you won't have any bad afterwards. If the tampon is pushed into the vaginal cavity during sex, it can be difficult to get it out again. In addition, the feeling of having sex with the tampon is not pleasant for you or for the tampon.

Sex with a soft tampon
As an alternative you can also use soft tampons. These are particularly soft sponges that you can insert into your vagina with a finger hole during your menstruation and which then suck up your blood. Like a conventional tampon, the sponge is placed as close as possible to your uterus. They have been specially developed for pleasant and hygienic intimate intercourse during your menstruation. They are also barely noticeable to your boyfriend when they penetrate. They are not only suitable during sex with menstruation, but also ideal for sports, sauna or swimming. If you are looking for soft tampons in a supermarket or drugstore, you will not find them, as they are only available in pharmacies. There you can get them for about one Euro.

This is how you introduce it: Squeeze the soft tampon at the side to create a tip at the front, which you can then carefully insert into your vagina. Tip: It works best with your middle or index finger. Push it in until it reaches just before the cervix.

When do I have to change the soft tampon? You can leave it in for a maximum of 8 hours. However, as with normal tampons, it is better to change one too many than too few. Unfortunately, the difference to normal tampons is definitely the pulling out, which is more difficult due to the absence of the drawstring.

Is sex during my period unhygienic?
One thing is certain: menstrual blood from a healthy woman is absolutely clean and therefore nothing to be disgusted by. Of course, stains can remain on the bed sheet or underwear, but this is nothing that cannot be removed with a towel as a base.

Do I have to use contraception despite my period?
You should definitely use a condom, because you could also get pregnant during your period. Why? Your boyfriend's sperm can survive in your uterus for up to five days. Many couples also find sex more enjoyable when using a condom, especially during your period - you also have a higher risk of contracting a sexually transmitted disease during menstruation.

Alternatives to the tampon during menstruation
If you are reluctant to use a tampon, there are of course other alternatives for preventing your period blood from staining your clothes and leaking. One option is the period underpants. They look just like normal panties, but they have a pad built in to absorb the blood. Unfortunately, there are only a few suppliers of underpants online. Advantage: It is environmentally friendly, very durable and you do not need any additional product during your period. Before sex you can simply take them off. Disadvantage: You have to wash them out well after each use and always have a second one with you when you change.

Another alternative to the common tampon is a menstrual sponge. This is organic and environmentally friendly because it comes from the sea. It is disinfected and shaped before sale. So it can be inserted like a normal tampon during bleeding. Advantage: It can be easily inserted and is also suitable for light days. Furthermore, it consists completely of natural material and is reusable. Plus: It can even be worn during sex and stay inside.