cosmopolitan - Soft-Tampons: Orgasms during your period? Treat yourself! 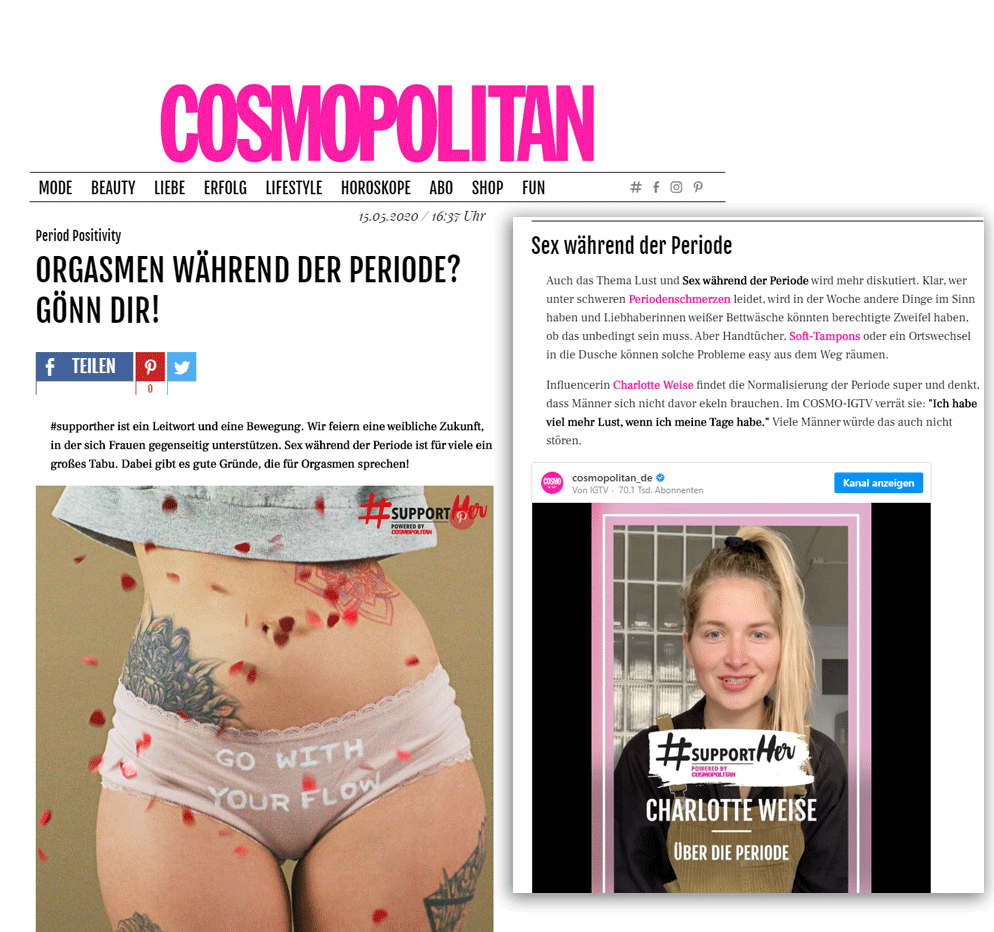 #supporther is a motto and a movement. We celebrate a female future in which women support each other. Sex during menstruation is a big taboo for many. But there are good reasons for orgasms!

Women perceive their periods very differently. Many of them are plagued by PMS symptoms before they even start. They feel physically and mentally uncomfortable and then stock up on chocolate and other snacks to get through the days somehow. Others enjoy their periods as a sign of their health. On Instagram and beyond, the #PeriodPositivity Movement is growing. It is dedicated to ridding menstruation of its stigma and educating about diseases like endometriosis.

At the same time the shameful handling of the days is to be loosened. Smuggle tampons secretly like drugs into the hand of your girlfriend? Advertise hygiene products with blue alien blood? No, thanks! People openly share their experiences with (organic) tampons, panty liners, the menstrual cup and period underwear. Why not? After all, half of humanity bleeds regularly and there is no reason to hide because of it.

Sex during the period

The subject of lust and sex during menstruation is also more discussed. Of course, those who suffer from severe period pains will have other things on their mind during the week and lovers of white bed linen may have reasonable doubts as to whether this is absolutely necessary. But towels, soft tampons or a change of location to the shower can easily get rid of such problems.

Influencer Charlotte Weise thinks the normalization of periods is great and thinks that men don't have to be disgusted by it. In COSMO-IGTV she reveals: "I have much more desire when I have my period." A lot of men wouldn't mind that either.

There are also biologically good reasons for orgasms during menstruation. The journalist Heike Kleen writes in "Das Tage-Buch": "An orgasm is better than any painkiller, this statement is also supported by gynaecologists. An orgasm contributes to relaxation and has an antispasmodic effect, the released happiness hormones can relieve pain. The resulting muscle contractions of the uterus additionally stimulate the menstruation - more blood flows afterwards, but in return you get through your period faster".