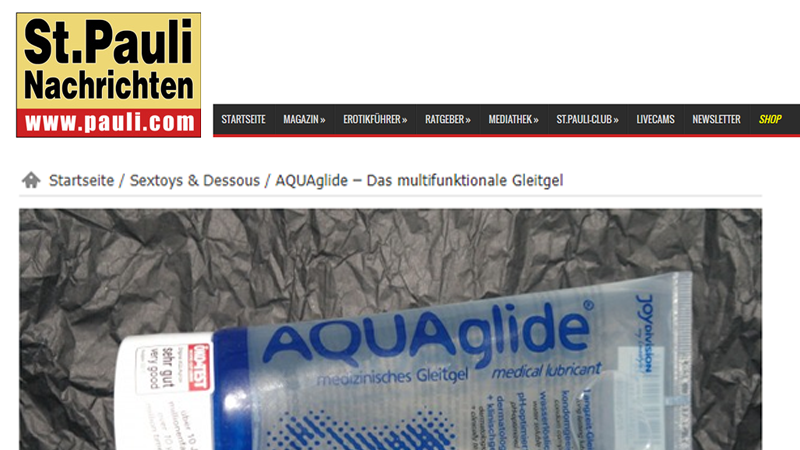 For many people lubricants are an indispensable part of their love life. Lubricants make it easier to insert the male member into the vagina or buttocks and thus prevent pain or injury during sex.

But there are sometimes considerable differences between the various products on the market. Lubricant has proven its worth over the last ten years and is therefore very popular with men and women alike.

AQUAglide, which is produced by the company Joydivision from Hanover in Germany, has a number of positive features that make it stand out from other products.

In contrast to many other lubricants, it is approved as a medical product. It is characterized by a high, clinically and dermatologically tested skin compatibility. In addition, AQUAglide is subject to permanent quality controls which ensure that the gel is harmless to health and which also ensure that the product is constantly being optimised.

In addition, it is water-based and free of grease and therefore suitable for use with condoms, as it cannot affect the material of the condoms, as is often the case with oil and grease based lubricants. Furthermore, AQUAglide is also suitable for oral sex.

A further strength is the duration with which it retains its lubricating properties. Especially water-based lubricants tend to lose their gliding properties relatively quickly. This weakness could also be circumvented with AQUAglide, so that this gel is still very effective even after a longer use.

If you prefer to have taste and smell in your lubricant, you can choose between the following varieties of AQUAglide: Strawberry, cherry, banana, raspberry, cappuccino and exotic.

Because of its special properties AQUAglide has already been awarded four times with the best mark at Ökotest. It is therefore not surprising that AQUAglide has become a product sold millions of times and is now one of the most widely used lubricants in Europe.